From NetherilKnowledgebase
Jump to: navigation, search

On this page, you will find maps and other useful information about the geography in Netheril: Age of Magic

Some key facts on Netheril ...

plus the following special areas ...

So get out there and have a look around :)

note - of course these numbers can change over time.

Empire of Netheril This map displays the greater area of Lower Netheril that our server is set in.

Those with a Star symbol ( Army style ) are a general location of Enclaves. Cities and towns are marked with a black dot, the large the dot the bigger the city/town. The Star symbol near the town of Hadrian is the Hamring Enclave which is in-game and the setting.

Local Region Shown here is a closer look at the local region for the server. 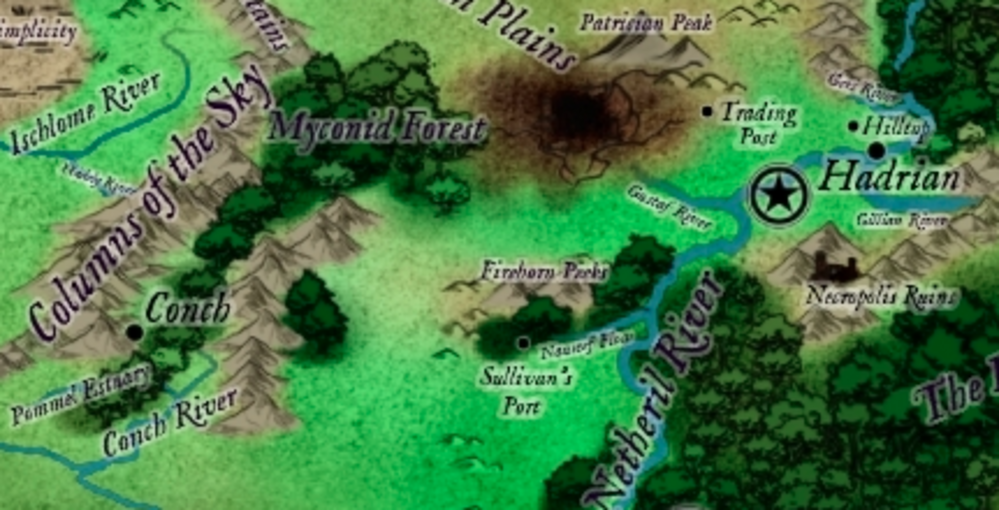 Poised at the border of the Netherese Empire, Conch was settled as a forward expansion to secure the mountain-pass through the columns of the sky to facilitate trade with the western nations and begin mining operations by order of Archmage Marigax. Now a town independent settlement with links to the Empire via the West Netheril Trade Company but not under any enclave control to the current day.

Once a fishing village grew into a trading post gathering materials and resources for the Valstiir Enclave. Now that the enclave has gone, it is an important trading city with its location on the Netheril River with its large ports and caravans trade that comes from the Eastern Forest and Patrician Plains.

Know for its Black Market trade, this trading post has grown into a large city after a recent volcanic disaster that covered the trading post in ash. It has literally dug its way out to where it is today, adding a large mine to its resource trade. The current Sullivan is a tiefling who replaced the aging Minotaur predecessor after the volcanic disaster. Sullivan's trading port has a mixture of monster races that come to sell and buy wares for there clans ... so it can be a dangerous place.

A large elven settlement that sits on the border of the Netheril River and the Eastern Forest. It has of late built an outpost on the river and a trail that leads to the town deeper into the forest.

A small settlement of Halflings, that has protected itself from attack with a magical shield after it was almost destroyed by fallen rocks from a newly created enclave.

The Giantsbane dwarf clan reclaimed their ancestral caves from orcs over a century ago. The reborn settlement attracted many dwarf colonists and expanded in the ensuing decades. Near Hadrian's south bank, it has retained friendly ties with that city due to past aid from its adventurers and the dwarfish Southern Ore Trading Company.

A small but prosperous enclave of which little else is known. Local folklore advises against visiting it, warning "Hamring has a strange effect on people" whatever that means.

A bustling Drow settlement in the Middledark with a thriving trade in slaves, and an extremely dangerous place to be for above-grounders.

A duergar fortress which is locked in sporadic conflict with the Drow of Szithaelar. Many people blame pollution in the region's groundwater on Dhorn Durahl's indiscriminate mining practices.

Once known as one of the greatest enclaves around, repelling attacks from other enclaves ... the Valstiir Enclave once moved around the region of Hadrian and the Eastern Forest to its east. It now forms a desert area at the base of the Patrician Peak after crashing into the ground and splitting into many pieces. What happened has been a mystery, with adventurers and others head to the crash site to recover items and lore.

Destroyed by Lady Valstiir, the remains of the Necropolis hit the ground to the southwest of the Gillian River. Over the years adventurers have come and gone seeking riches ... but they must always beware of the horrors that can be found in and around the ruins of the crash site.

Finally, this map displays a detailed look at the area around Conch and names some of the important landmarks. These are explained further below. 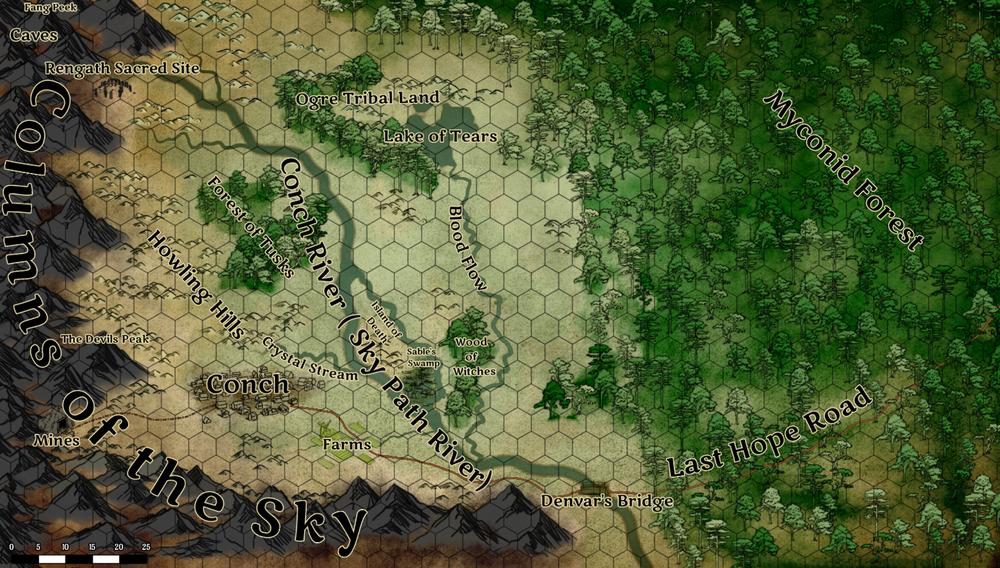 Columns of the Sky

These were some of the tallest mountain peaks of Lower Netheril, stretching thousands of feet into the sky and creating a landmark that could be seen for hundreds of miles in every direction. To the ground-based cities, these mountains were near-impassable gouts of rock that added days to any travel through the area. To the Rengarth, however, the slender peaks were the home of the gods. All throughout Netheril’s history, the Rengarth made a practice of executing anyone they found near the peaks, especially if they were found with animal skins or gems taken from “the hearts of their gods.”

This set of natural caves twists and turns through the bowels of the Columns of the Sky and is a maze for those who do not spend much time in such environments. At its center, under the mountain known as Fang Peak by the Netherese, is the mysterious Cave of Lost Souls, a large chamber in the Columns of the Sky that holds a variety of gemstones and other treasures.

Though all of the Columns of the Sky are sacred to the Barbarians of this land, this one, in particular, is guarded well. The savages themselves will never speak of it and only a few know of its secrets preferring to bite out their own tongue than speak of it. Some theorize it has something to do with the Cave of Lost Souls, but such is only guessed at.

This massive mountain looms over Conch and is the highest peak in the immediate area of the town. Many have tried to climb it, but none have been able to yet, even with the aid of magic. It gets its name from the vague shape of the mountain, like a devil perched, wings folded back and looking down on its victims below.

These are the mines of Conch and produce all sorts of valuable metals and gems.

About 5 miles from the main settlement are some fertile farmlands. They produce wheat and corn and other vegetables for Conch. No livestock other then a few chickens and cows are produced as goblins are a constant threat to large herds of animals.

Pure spring water from the Howling Hills forms this beautiful stream and the fine sand that covers the bottom makes the water as clear and as beautiful as crystal.

These lightly wooded hills are home to all sorts of wild animals that provide meat and furs to Conch. It gets its name from the savage packs of wolves that also hunt this area.

Named for the high concentration of wild pigs that live here. The meat, pets, and massive tusks that can be gotten here make it a valuable place for the town, though the wereboars that stalk the area make it a very dangerous place to hunt.

Discovered by the explorer Denvar Sable the island has a terrible history. Originally set up as a prison and forced labor camp, the head of the guards who had been given wardenship of the colony had more sinister plans for it. The prisoners here were given little in the way of tools, clothing, shelter or food and those that complained were tortured and killed for the entertainment of the Warden and to feed his dark desires. Through this cruelty and the inhuman treatment of the prisoners, it led to widespread disease, abuse of power, violence, and even cannibalism. The warden used this suffering to gain the attention of the Demon Lord Orcus and through it founded a cult that remains to this day on the island. All manner of undead roams this island, the remnants of those that were sent here to be punished. The island is always covered in a dense mist and sunlight never seems to penetrate it.

A dank swamp of stagnant water and overgrown trees. Many horrors lurk in here and only the bravest would be willing to enter. Many hags from the Wood of Witches come here to hunt for trolls and other abominations to use as pets or guardians.

A thick and unnatural woodland grows here and is home to many covens of hags and other ghastly monsters like spirit naga and evil fey.

This forest was named for the indigenous fungusmen who inhabited its depths. No animosity existed between this race and the Netherese, since the forest was not logged too severely and new trees were planted. The myconids knew the forest relied on its borders to maintain the humidity of its interior, which in turn the myconids relied on for their continued survival. Rengarth raiding parties roam the southern Myconid Forest, slaying all not of their lineage they encountered. They would pay particular attention to the Last Hope Road and attack all that used it.

The red sand that formed the bed of this river gave it its common name. The sand here could be used to make colored glass and was sort after, but hard to obtain in the wild part of the land.

Said to be formed of the tears of those who have lost loved ones in the battles with the brutal Ogres that call this area home.

This area is home to many clans of ogre and other lesser giants. Despite all attempts by the Rengarth the giants have never been driven from this land and seem to come from a never-ending font. Stories say that they come here from the Underdark and that somewhere in the area is an access point to the dreaded underworld of the Drow.

Named after the explorer Denvar Sable this bridge was once site of a battle where a small band of militia held off a massive horde of raiding orcs sweeping towards Conch.

The only road that connects Conch to the rest of the Empire. It is an unsafe and long trip from Conch to Sullivan's Port.